Traffic jam on Amra Marg towards Mumbai, due to accident between 2 containers

Traffic jam on Amra marg towards Mumbai, near Navi Mumbai Municipal Corporation headquarters due to accident between two containers at Belapur 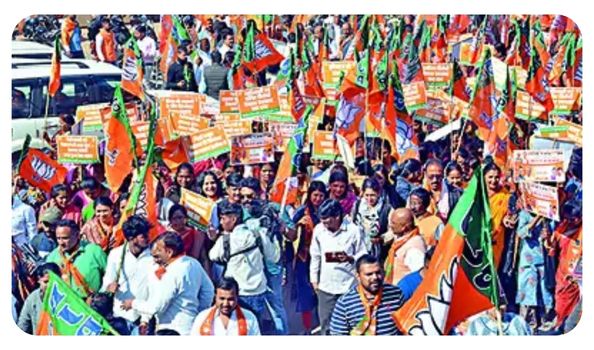 Ranchi: Around 5,000  workers of the opposition BJP on Monday took out a rally on a motorcycle and on foot holding party flags against the Hemant Sorenled Government from Morhabadi ground to the district collectorate.

The stir also marked the party’s second leg of ‘ Hemant hatao, Jharkand bachchao (Akrosh rally)’, which will be held daily till November 25 at all district headquarters, against corruption, lawlessness, and lack of governance, BJP workers said.

Women workers of the party held banners and posters, raising issues and women’s safety, which are under the scanner owing to numerous crimes against women.

BJP planned a series of stirs to highlight the alleged wrongdoings of the ruling parties, said state BJP president Deepak Prakash, who along with Ranchi MLA CP Singh, spearhead the rally. Prakash said, “BJP has to rise to the occasion to expose the wrongdoings of this popular government. While common people are struggling for basic necessities, those in power are shamelessly on a looting spree of natural resources and public money. The CM and his coterie are patronizing these acts. The ED’s summons to the CM in corruption cases was the first in the country for any head of the state in office. People must be aware of this.”

Ranchi MLA Singh said Soren and his government have become synonymous with corruption, “Look at anywhere and you will only find scores of corruption happening,” he said, adding that it’s time for the people to uproot this government in next elections.

Rulling congress, however, dubbed Monday’s stir as the BJP’s ‘drama’.