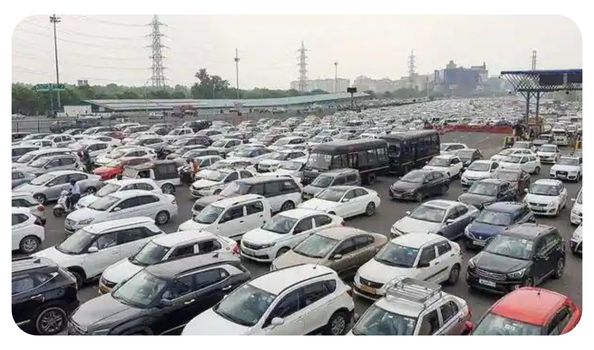 HYDERABAD: The Telangana TDP rally threw traffic out of gear, particularly along the KBR Park stretch, for hours on Thursday afternoon leaving commuters fuming. Around noon, traffic was seen piling up right from Jubilee Hills Road No 45, which continued up to the TDP office on L V Prasad Marg. The scene on the other side of the road – for those driving towards Jubilee Hills – was much the same.Apart from party cadre, trailers with music systems and giant party flexis encroached a chunk of the carriageway, adding to the chaos. While there were some cops manning the traffic around the TDP office – the free left here was blocked – the rest of the junctions were barely being monitored.”It took me at least 40 minutes to reach Banjara Hills Road No 2 from Jubilee Checkpost – only one-and-half km apart. That there were limited cops on this stretch made matters worse as errant motorists kept cutting lanes, scraping the sides of other vehicles and slowing down traffic,” said Saanvi S , a private employee.Social media too was abuzz with motorists’ complaints. Srinivas B posted: “@HYDTP :TDP rally at Jubilee Hills terribly mismanaged. Stop vehicles from entering KBR park area. Took 1hr to move from Rd45 to checkpost to take U turn and get out. Allow people to get out by opening U Turns”Ranjeetha Sai, said that she was forced to reschedule her doctor’s appointment at Somajiguda – initially slotted for 12.30 pm – because of the traffic mess. “I sincerely urge traffic authorities to inform residents a day or two in advance, next time there is such a massive rally planned on an arterial road,” she said