Protests in Leh, Kargil for Statehood as Ladakh completes 3 years as U.T.

In Leh, the street protest was spearheaded by the Apex Body-Leh (ABL), an amalgam of religious and political parties in the district. Bengali Chhatra-Yuba Samaj, a West Bengal-based social organisation, on Monday strongly protested against the attacks unleashed by the Khasi, Jaintia and Caro groups in Shillong on October 28. 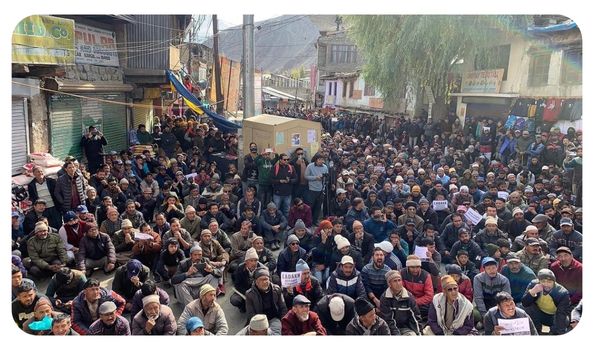 Ladakh’s twin districts of Kargil and Leh on Wednesday witnessed street protests to press for demands of Statehood and special status under the Sixth Schedule, as the region completed three years of Union Territory (U.T.) status this month.

“The Government of India should pay heed to our demand to grant Statehood. In case Statehood is difficult to grant, let Ladakh be a UT with the legislature. Besides, the demands of constitutional guarantees under the Sixth Schedule and additional representation in the Parliament should be accepted,” Mr. Chhewang said.

He said the bodies from Leh and Kargil are meeting again to chalk out a timeline for protests if the demands are not met by the Centre. “We request the Centre to resume dialogue soon. For unknown reasons, the dialogue process started last year could not be taken forward,” Mr. Chhewang said.

Kargil leaders to fight battle in Supreme Court on Article 370
Panel formed
On January 6, 2021, Union Home Minister constituted a committee under Minister of State Home G. Kishan Reddy to have a dialogue with the representatives from Ladakh “to find an appropriate solution to the issues related to language, culture and conservation of land in Ladakh”.

The KDA and Apex Body-Leh (ABL) have been jointly fighting for the restoration of Statehood and special status under the Six Schedule on the lines of rights granted to the tribal areas of Assam, Meghalaya, Tripura and Mizoram to safeguard local culture, language and demography.

KDA leader Sajjad Kargili said in the name of empowerment, Ladakh is witnessing disempowerment. “Democracy needs to be restored here. There are students with doctorate degrees but without jobs. Schools are without teachers. Around 40,000 trees were cut without any accountability. Ladakh needs more representation in Rajya Sabha as well as Lok Sabha,” Mr. Kargili said.

Meanwhile, the government on Wednesday issued a notification empowering the Lieutenant Governor (L-G) of Ladakh to make rules for recruitment to the Public Services, Group-A and Group-B gazetted posts.

The notification empowered the L-G “to regulate the recruitment of the posts and necessary qualifications for those posts and service conditions like probation, seniority confirmation and promotions of the persons appointed”.

“The UT shall obtain prior approvals from the Centre in respect of the rules, wherever it is applicable,” the order said.