Over 300 residents protest in front of the Collectorate demanding to build electric crematorium in Othakaalmandapam. Location: Coimbatore Collectorate.

More than 300 people from Othakkalmandapam staged a demonstration at the Collector’s Office here on Monday demanding the local bodies to set up an electric crematorium in the area as announced by the State government recently. 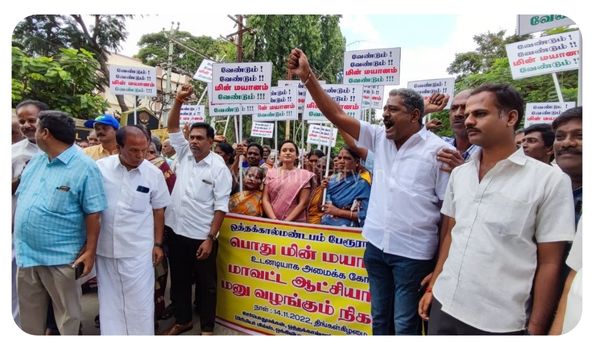 More than 300 people from Othakkalmandapam staged a demonstration at the Collector’s Office here on Monday demanding the local bodies to set up an electric crematorium in the area as announced by the State government recently.

During the weekly grievance redressal meeting, the residents petitioned the Collector in this regard. “Many people have been opposing the State’s initiatives and blocking the works to set up the electric crematorium. Their allegations are baseless. Many municipalities and town panchayats already have electric crematoriums and it is tough to find workers for regular crematoriums. Hence, this must be built immediately ,” the locals claimed.

Notably, on October 2, several other locals from Othakkalmandapam staged a protest against the Town Panchayat’s move to set up an electric crematorium next to a temple in the locality.

Meanwhile, people representing 35 families belonging to the Narikuravar community requested the Collector to shift them from Ramachettipalayam in Sundakkamuthur owing to water stagnation in their area. “We have been staying there for nearly 35 years now, but the rainwater and sewage stagnation in our area is constant every year. We request to be shifted elsewhere with free housing facility,” they claimed.

Collector G.S Sameeran received on Monday a total of 341 petitions — 74 petitions for free housing, 73 for patta, 12 for employment, and 182 for other reasons like pension, scholarship, new family card, ration card etc.