“Over 3,000 acres out of the total land required for the project are agricultural land. Also, the remaining land is used for grazing purposes by farmers who rear cattle in the panchayats. 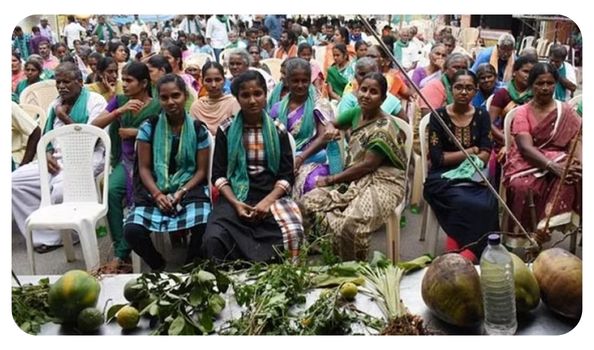 COIMBATORE: Tension prevailed at the venue of a protest site in Annur when a farmer attempted suicide. He was rescued by others.

Around 1,500 farmers participated in the protest on Othimalai Road in Annur Town on Monday, opposing the government’s decision to acquire land across six panchayats in Annur and Mettupalayam Taluks for developing Industrial park.

They wanted the State government to withdraw its decision of developing the industrial estate by acquiring 3,731 acres of land across Kuppanur, Akkaraisengapalli, Vadakkalur, Pogalur in Annur Taluk and Iluppanatham and Pallepalayam in Mettupalayam Taluk under the Tamil Nadu Industrial Development Corporation Project. “Over 3,000 acres out of the total land required for the project are agricultural land. Also, the remaining land is used for grazing purposes by farmers who rear cattle in the panchayats.

We did not demand industries to create employment opportunities in the locality. To improve irrigation in area, the government is implementing Avinashi – Athikadavu water project,” said Kumara Ravikumar, president of the Struggle Committee against the project. AIADMK MLAs led by SP Velumani extended support to the farmers. Velumani said he would bring a special attention motion on the issue when the Assembly convenes.

The state government gave administrative sanction for acquiring land and works are likely to be completed by December 2023. Besides poramboke land (revenue land), a total of `789.10 crores has been earmarked for acquiring land in the six panchayats.