The private hospitals in Rohtak, Hisar, Bhiwani, Dadri, Fatehabad and some other parts suspended their medical services, leading to inconvenience to patients 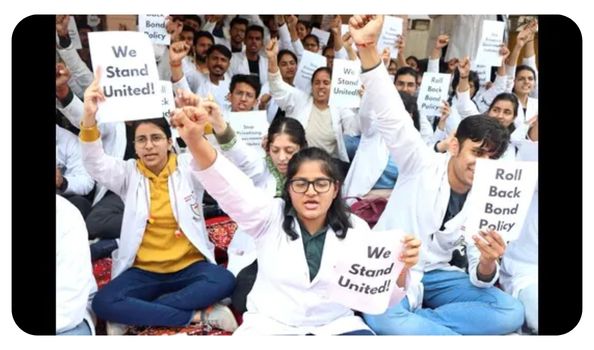 : The private hospitals in various districts of Haryana on Monday suspended medical services, except emergency, in support of the MBBS’ students protest against the Haryana government’s bond policy.

The private hospitals in Rohtak, Hisar, Bhiwani, Dadri, Fatehabad and some other parts suspended their medical services, leading to inconvenience to patients.

The Indian Medical association (IMA) had earlier announced to suspend all services, except emergency, in support of protesting MBBS students across the state.

The students said that the government has adopted lackadaisical approach and does not want to resolve the issue and they were ready to protest for an indefinite time.

KARNAL: Members of the Indian Medical Association (IMA) on Monday observed a one-day strike by closing down the OPDs, extending their support to the MBBS students who are protesting against the bond policy in Karnal.

The doctors joined the protesting MBBS students of the Kalpana Chawla Government Medical College (KCGMCH), Karnal and carried out a protest march to the mini secretariat. They also submitted a memorandum to the district administration.

Dr Rajat Mimani, Karnal IMA secretary, said that the organisation was with the protesting students in their fight against the bond policy.

She said that the students cannot afford hefty bonds and the government should withdraw the policy immediately.

Seven medical students have been sitting on hunger strike for the last five days.